Berlin is a hub for creative development and experiments in circular economy, which means a regenerative system in which resources is reused by slowing, closing, and narrowing material and energy loops. It can be by long-lasting design, maintenance, repair, reuse, remanufacturing, refurbishing, and recycling.

In the middle of this, in Berlin, you find Claudi Sult, German echo enthusiast, green entrepreneur and digital nomad.  But for the moment trying to start up in Melbourne, Australia.

– I quitted my job at Visit Berlin because I needed to do something on my own and I had realized that I was not made for the corporate life, says Claudi.

Claudi was curious about the green scene in Berlin and had to check it out for herself. She decided she wanted to show how sustainability could verge into something that people can grasp, understand and have fun.

– I already had this idea in my mind that I could bring everything that was related to sustainability and fun in one place. Because it didn´t existed so far as I saw it, says Claudi. So, Greenme Berlin was borne in August 2016 as an online platform. I tried to cover all the eco-minded and creative things in Berlin, seen from a lifestyle. Food, fashion, urban gardening, reused spaces and things like this.

GreenMe Berlin is an online platform, podcast & more, showcasing the creative Berlin green scene. No matter if you live there or visit Berlin on your travels. Together with her friend Arianna, who works with Green Fashion Tours in Berlin, Claudi started the Circular Economy Tours.

– We hope to be able to launch a website in February, says Claudi.

Claudi has her view of why Berlin has become a hub for circular economy. First of all Berlin is the capital, where people from all kinds of backgrounds, countries, and the creative scene, come together and create very good ideas. There are different kinds of lifestyles that merge and the creative people are attracted by the relatively low cost of living in Berlin.

It makes Berlin a perfect ground to start new businesses, and really try something out. It´s like a testing ground, especially for circular economy. The economic risk compared to other similar hubs in the world is pretty low.

– People in Berlin are super keen on connecting and collaborating, so it´s not really hard to find your tribe or to find likeminded people, says Claudi. Another thing I find very special is that it brings together the entrepreneurs with the artists, connecting the start-ups with the crafts people, and with anti-capitalists.

The circular economy is partly supported by some investors, like a Swiss foundation that made Berlin´s Circular House a firm ground for evolving green enterprises for 75 years.

– There is a growing amount of social funds you can apply from, says Claudi. There are foundations and organizations that raise capital and the government is very supportive. There are state and municipality funds available.

– In Berlin projects and start-ups merge and build things together. They believe that they can build things and are critical to risk capital. Berlin is filled with small projects on circular economy and when you link them together they create something very big.

Claudi, like her business partner Arianna, are more or less digital nomads. No own office but works partly at co-offices, cafées or at home. Of course they meet people. Their green tours give them opportunity to talk face-to-face to all sorts of people interested in echo-arena of Berlin.

For the moment Claudi is in Melbourne, Australia, to try to launch Greenme Melbourne.

– Sustainability is an important issue in Melbourne and  food wise they have a big eco mind-set, says Claudi. They have organic growing and so on. But it´s a little bit more capitalistic than in Berlin. It´s much more expensive so it´s harder for grass root projects to evolve. But if they do their job good with skills and marketing then there is huge bio potential over here. People here love to spend money on sustainable products.

Claudi thinks of a prosperous future for circular economy.

– Definitely! I hope we are at the starting point at this. It has to come, says Claudi. The way the world economy works and treats to environment you can see how the old economical system is shaking. People question it. We cannot go on producing in a linear way, throwing large parts of what we produce away.

Both politicians and company leaders realize that something has to be done. A lot of research is done on circular economy, like using pineapple fibres for fashion. The food industry and fashion industry suddenly have something in common.

– Of course there are critics and people who gets scared of this development, says Claudi. They think that we can´t do anything about it. But if we focus on the negative aspects things will not change. We can´t wait for the politicians and the big economic players. We want to show, with our tours that everything we do has an impact on communities and the society. We show the smaller stories. 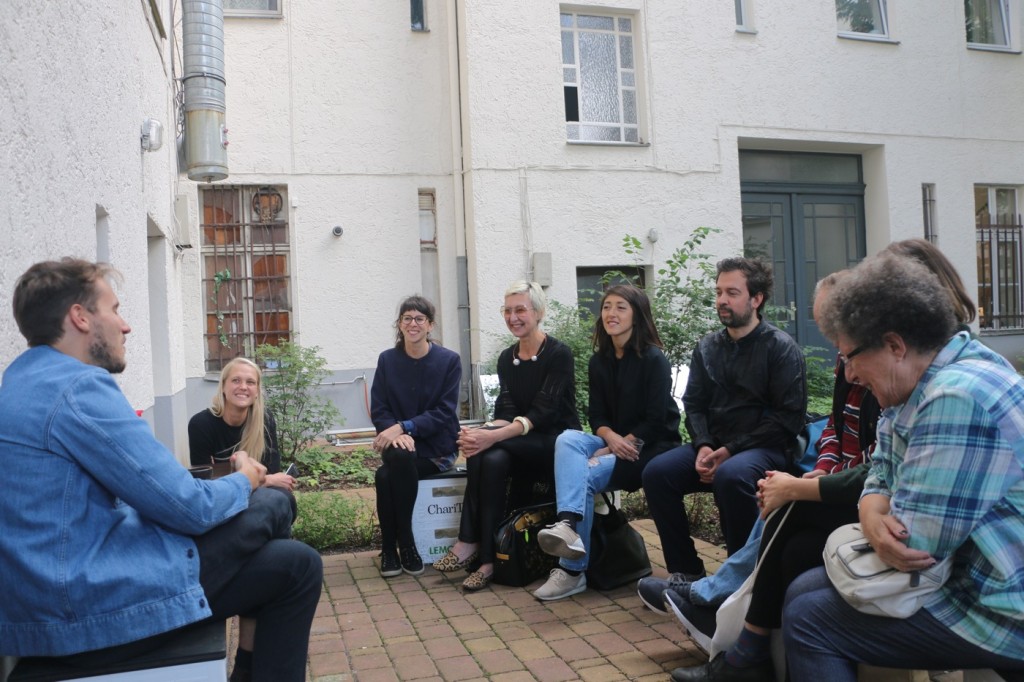 At the end of November, we met in Italy with our project partners and we learned about media competencies and storytelling.

Eurbanities 2.0 is an Erasmus+ project aiming at empowering citizens for being actively engaged in the development of equitable and sustainable European urban neighbourhoods.

Circular Skills: a guide on how to teach circular economy

Circular Skills is an Erasmus+ Strategic Partnership in innovation for VET. CM is the leading partner and is collaborating with other organizations based in Germany, Finland, Italy, Poland and Slovakia.